Last week, I had the distinct pleasure of attending the first Steampunk World's Fair in Piscataway, New Jersey. Being steampunk, there were plenty of fine, Victorian beards on display. There were plenty of things that pass for beards in the Twenty-first Century as well. To separate the metal from the dross, there was held an Epic Bear and Moustache Competition.

It was my first experience with entering myself and my beard into such a thing and I am humbled that so many people had such a difficult time choosing between me and the man who ultimately won the grand prize through his astronomical skill at the sport of rochambeau. Truly, his moustache, which stood a full five inches out from his face and from which he had scurrilously cut an additional four inches before coming to the event, was fully worthy of all accolades. 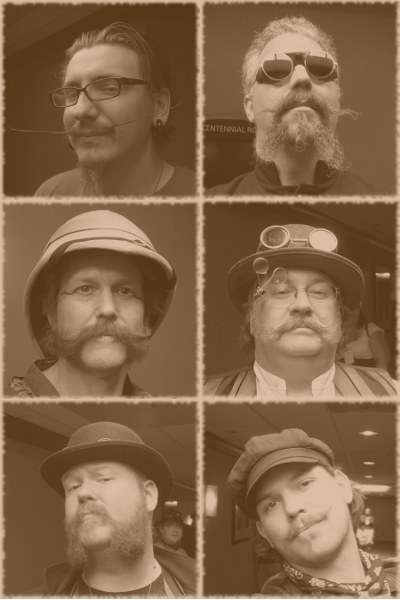 There were only a half dozen or so to enter the competition but this should in no way diminish the very fine facial adornments that wereto be found elsewhere throughout the convention. Many beards and moustaches of all classes and vareties were to be seen in the halls of the hotel, though I will note a higher percentage of friendly mutton chops than perhaps any other style as it would seem that the chops are seen a century later as somewhat indicative of the period.

I wonder if there was ever any sort of statistical analysis made of the prevelance of particular styles of beards at the end of the 19th Century.

Next week, I attend the World Steam Expo, another opportunity to witness the revival of the nearly lost art of pogontrophy.
Posted by Der Geis at 4:51 PM