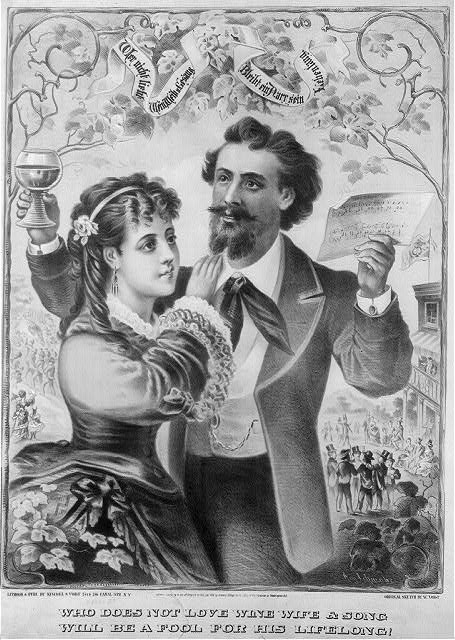 I have been cultivating my beard for quite a number of years and, while I have been inspired by the beards of over a century ago, I have endeavored to be somewhat unique in its styling. And yet, I continued to search archives in hopes of finding someone else who shared a similar beard so that I could make the claim that my beard was, in point of fact, period. So many beards and yet none that I could point to and say, "See! men of culture and style really do have such beards as this."

And here I find one that seems to add to that claim. This gentleman's beard is a circle beard but with some enhancements, specifically the moustache separated from the beard by being styled straight out and, even more unique, the "horns" on the beard trimmed to the center of the chin. Not an exact match to my beard, mind you, but certainly similar enough to be considered in the same taxonomy.

Culture. Style and the adoring gaze of his loving wife. And observe that she is gazing upon his fine beard. OK. So maybe she's actually looking at the sheet music but that is only for this illustration. Surely she must approve of both him and his beard all the other days of their lives. No fool he.

Unfortunately, I do not like wine so more the fool am I.
Posted by Der Geis at 11:20 AM